For Joy Lynn Davis, the artist, the lost sculptures of Kathmandu Valley sing a far more solemn song than imaginable. Davis has been coming to Nepal for the last 12 years, and every time she’s heard about sculptures being stolen or being rediscovered in foreign museums or homes. “This was very disappointing,” she says. “These artefacts are testimonies of a culture and are very important.”

Five years ago, Davis started an independent project to bring to light the issue of Nepal’s stolen and lost sculptures. This was definitely not an easy task. Even for a Nepali, to be frank. There is the extensive research involved—visiting locals and finding people with memories of what the different temples and precincts from which sculptures have been stolen used to be like before the statues disappeared. Davis was also a foreign national, someone—who at the time she started the project—couldn’t properly speak or understand Nepali. And then there were the paintings that needed executing (one realises the meticulous artistry that has gone into them only once one sees them). But Davis succeeded in the task she had set for herself. She read through volumes of books written on stolen and lost artefacts of Nepal. Davis discovered that in the 1980s Lain Singh Bangdel and Jurgen Schick had worked on separate projects (“Stolen Images of Nepal” and “The Gods are Leaving the Country” respectively) to document Nepal’s stolen artefacts. It is upon their research that the artist has built her own project.

Davis did her homework. She visited sites and spent time with the locals. “I used to record every word they used to tell me and then later ask someone to translate them for me,” she says. And she painted, spending about six to 10 weeks on one painting, for the last four years.

When asked why such work, she smiles. “These sculptures are invaluable. I want the world to know how important these sculptures were and what having them stolen means.” So far she has recorded over 200 such thefts and this information has been included alongside a searchable database at a website launched with her exhibition, “Remembering the Lost Sculptures of Kathmandu Valley”, which opened at the Nepal Art Council on April 10.

It is true that there have been various instances when once lost artefacts from Nepal have resurfaced around auction houses and museums around the world. And while Davis agrees that these artworks certainly look beautiful in homes or museums, she also adds, “But their values are incomparable here, in their original home.”

Davis hopes to increase awareness about the stolen sculptures of Nepal, and also perhaps encourage voluntary returns. “These sculptures are everywhere around the world and they should be returned,” she says, “The collectors need to understand than the artefacts have a deeper meaning and significance here that they will ever have in their homes.”

Davis’ artistic style is as striking as her ideas. The paintings are done on large canvases and feature the seat of the stolen sculptures and the daily life that surrounds them. Perhaps that’s what gives the paintings their natural texture. On one of these canvases you will find children playing around; on another, a woman standing with a plate of offerings for God; some sculptures stand alone in the growing wilderness. Lynn’s brilliant use of light and shadow in these paintings gives them an almost photographic quality. You might find that you are tempted to brush off that uncooked rice from the idol’s head, or ring that bell hanging in the distance. But perhaps nothing is more remarkable than the golden sculptures you will find in these paintings. In some, you will find entire sculptures painted in gold while in others it will be just a part that’s been painted in the precious metal. 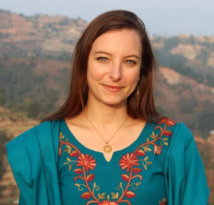 intings. The artist comments that the use of gold leaf (23 carat) in her paintings makes it easier for people to identify which sculptures were stolen and also stands for the commoditisation of the sacred. Davis says, “Gold is commonly used to denote wealth and status. We see gold being used in many paintings, especially Thangka. Gold means that God is present. And at the same time, gold also signifies riches and greed. These sculptures were sacred before but then they were stolen for money.”

For more information about the project, visit http://www.rememberingthelost.com